It Will Never Come, Lover 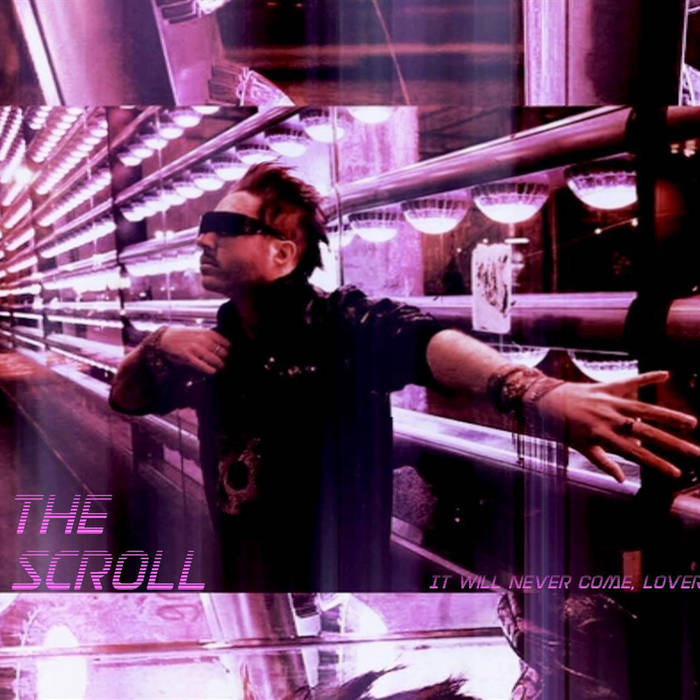 "I wanted to do an eclectic soundtrack for an imaginary futuristic 80's film. Something that would fit well during the Tech Noir club scene in The Terminator or Taffey's Bar in Blade Runner. Something that sounds retro, sexy and poppy, but also modern, lustful and hard edged. (…) I like contrast. The 80's had a lot of that. Miami Vice, for example, would have these florescent colors and cheesy music on the surface, but would also have this undercurrent of darkness, sexuality and danger. That's sort of how I see (The Scroll)." - JDP during an interview for Kiss FM 97.7

"The Scroll’s latest release is called It Will Never Come, Lover. (...) It starts with “Hybristophilia” (a paraphilia in which sexual arousal, facilitation, and attainment of orgasm are responsive to, and contingent upon, being with a partner known to have committed an outrage). The song starts with stabs from a distorted electric guitar joined by glitchy electronic sounds. A fast-paced synth bass riff sets the tempo of this silky yet edgy song. A saxophone (played by Katherine Paradis) slides in, while a super-compressed drum beat takes over the rhythm. The production on this song is very good; already I can hear a range of textures that fit well together, and everything is loud and clear. Jason’s voice is doused in reverberation as he sings delicate, breathy verses. Repeating, “I long to forget, I wanted to know,” Jason seems to be singing about curiosity killing the cat. The song takes a twist in the last few seconds, going into full club and house territory with a sample of the lyrics chopped up and thrown in, just the way a good DJ would do it.
“You Know Empathy, Right?” follows with a cheery and ambient mix that sounds like Tame Impala jamming with The Wailers. The song also features a ton of electronic, finely-tuned noise that slowly takes over the mix near the end. All I could think of was that this song sounds like a sunset. “How Can I Luv U Without Cheating On The 1 I Luv” kicks off with a steady drum beat and synth pad sounds that remind me of Tycho. A groovy bass line riffs under Jason’s falsetto, while a funky guitar strums somewhere in the distance. I’ve heard his shows are dance parties, and listening to this album makes me want to buy a standing desk. If you like ambiance and dance grooves, check this out.
“Debonair” is the fourth track on this album, and here we get something closer to deep house. Massive sub-bass frequencies shake the ground while electronic samples provide an industrial edge. Vocal layering builds onto this song’s repeating theme, which is closed by a funky guitar solo. “A Total Lack Of Respect For My Heart” begins with a bunch of acoustic guitar riffing, soon joined by a lovely duet consisting of Jason and Millie Rosado singing together. The second half of the song incorporates a sped-up… guitar solo (I think), while the percussion switches to a more tribal rhythm, giving this ending a frenetic, emotional overall feel. “Nefarious 極悪な” is next, and it reminds me a lot of Beck’s Midnight Vultures if that album had been made in the eighties. Samples of spoken Japanese are slipped into the mix, making me feel like I’m at an airport terminal on a trip somewhere far away.
This album has seventeen songs. I’ve listened to them all and they’re all great. If I could, I’d describe each one, but if I did that, this review would span a dozen pages. It Will Never Come, Lover is packed with great ideas, catchy melodies, funny song titles, awesome production, and tons of music. Jason seems to be onto something here, combining elements from various genres to create something new. One thing’s certain: I’ll be catching their next show."- Dave Tone, bucketlistmusicreviews.com

" (...) we’re excited to find out about them. They’ve just put out their fourth album It Will Never Come, Lover which seems doubtless one of the most ambitious endeavours of the year, at a massive seventeen tracks ranging from many styles. It’s tough to pick a highlight but the hooky chorus of slow electro-ballad “You Know Empathy, Right?” just won’t leave our heads. A blissful, noisy alternate-universe pop hit."-silentshout.ca/

"Here is the fourth album from the Montreal group The Scroll , led by the hyper-productive and mysterious Deeh whose sexual and dreamlike universe teleports us to a fantasy of defrocation and invites us into an enthusiastic wet dream that is strangely liberating . Shoegazer in leather boots , the texts of the album are slogans of random emotions, that are often contradictory. And it's beautiful.
The saxophone, played by Katherine Paradis on Hybristophilia, leads us to an image of a dancer draped in lace and metal wrapping her serpent-like body, accompanied by Marie Eykel in a BDSM outfit flogging a virgin boy with a soft moustache. It makes you want to be a replicant in Blade Runner instead of living your own small life.
This is dreampop and electro that could be best described as something of a bad trip after a night out, followed by a good buzz of psychotronic dolphin apparitions. If the metal angels were armed, they 'd shoot lasers while listening to The Scroll.
Put this in your player and walk down the street, eyes closed while smoking some bidis."- Translated from indicebohemien.org

"Out now is “It Will Never Come, Lover”. A 17 track album full of guitar driven but heavily electronic influences songs. Such as the opener “Hybristophilia.” There’s even some Bowie in it with a funky saxophone. The accompanying video is a trip through the dark. The dark of the 1980s."- Transatlaticdiablog.com

The Scroll is a Canadian neo-wave band, consisting of multi-instrumentalist J Deeh and his various collaborators.
While being one of the most eclectic band's around, The Scroll has been described as indie electronica, art rock, neo-folk, dance-rock, industrial, dream pop and shoegaze. ... more

Bandcamp Daily  your guide to the world of Bandcamp